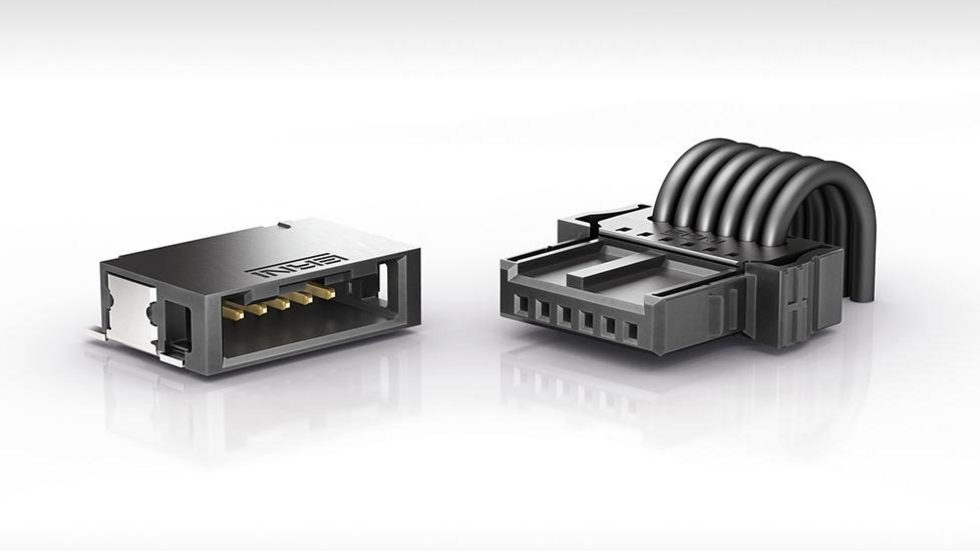 ERNI is expanding its successful MiniBridge (1.27 mm pitch) and MaxiBridge (2.54 mm) cable-to-board connector families with the single-row MicroBridge family in a 1.27 mm pitch. In developing the MicroBridge cable connector, ERNI has consistently implemented the requirements of customers from the automotive sector. Right from the start, the cable-to-board connector has been developed in accordance with the demanding automotive test specifications VW75174 and USCAR-2. Against this background, the robust MicroBridge offers superior mating integrity and simple and reliable processing.

Koshiri security, an optional electrical connector position assurance (e-CPA) and possible color and mechanical coding for any number of pins ensure safe and reliable connections. Koshiri security means protection against damage caused by improper or skewed insertion. With the MicroBridge, tongues on the female connector and grooves on the male connector allow the pre-alignment of the connector housings, ensuring a precise mating process. The contact pins of the male connector are not damaged by improper, skewed mating. The e-CPA enables testing for secure contact between the female and male connectors even during the mating process. A shortened test pin (without signal and power supply function) is used on the male connector for this purpose. All the above-mentioned functional features for a high degree of mating Integrity and reliable contacting help to reduce possible failures in production and the field.

Despite the small pitch of 1.27 mm – making it ideal for use in small installation spaces – the MicroBridge is very robust. This connector can withstand the harsh environmental conditions with vibrations or shock loads (as specified in VW75174, for example) and high temperatures in the vehicle. This is ensured, among other things, by the latching mechanism on both sides and the high-temperature resistance. The housing latching mechanism on both sides provides acoustic and haptic feedback of the interlocking during the mating process. The latching mechanism can be released without tools. The solder clips of the male connectors absorb mechanical stress and resist high shock and vibration loads. The high-temperature resistance of up to 150 °C allows the connectors to be used in areas exposed to demanding temperature conditions, e.g. close to LEDs in the headlights.

The MicroBridge is available as a single-row male connector in straight and angled SMT versions. The male connectors are supplied in tape-on-reel packaging for automatic assembly. The single-row female connectors are available as insulation displacement versions (IDC). They are currently available with a 90° cable outlet and are qualified according to internationally recognized standards. The double design of the insulation displacement terminal further ensures reliability. In addition, the integrated strain relief protects the IDC from mechanical stress caused by cable movements.

The MicroBridge cable connector with a 1.27 mm pitch is currently available in a single-row version. Pin counts from 2 to 20 are possible – the currently available versions can be found here: https://www.erni.com/en/microbridge. The current rating per contact is specified at 9.0 A at 20 °C (2-pin version).